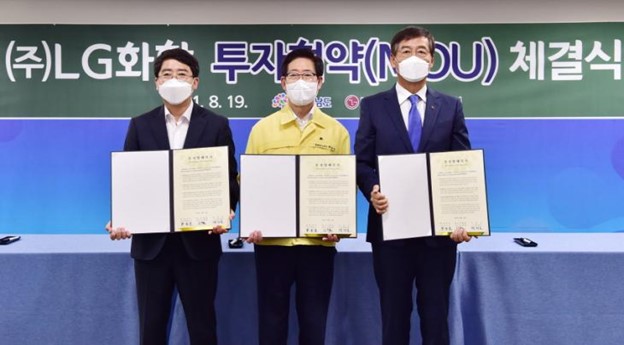 On the 19th, LG Chem announced that it will invest a total of 2.6 trillion Korean won by 2028 to build a total of 10 plants, including biodegradable PBAT and POE for solar film, at its Daesan Complex in Chungnam Province.

Starting with the construction of PBAT (polybutylene adipate-co-terephthalate) and POE polyolefin elastomer) plants this year, LG Chem plans to develop the Daesan Complex as a mecca for ESG-based businesses, from bio-based raw material production to eco-friendly materials, waste plastic recycling, and greenhouse gas reduction by 2028.

Both plants aim for commercial production in 2024. The resulting increase in sales is expected to exceed 470 billion Korean won per year.

According to the industry, PBAT and POE are expected to continue to grow at an average annual rate of 30% until 2025 due to increase in demand for perishable plastics and the expansion of new and renewable energy following the ESG trend.

PBAT is a biodegradable resin that decomposes rapidly in nature and is expected to be a great help in solving environmental problems such as waste plastics.

POE has high insulation and moisture barrier properties and has superior power generation efficiency, so the demand is rapidly increasing for use in films that protects solar panels and minimizes power loss.

In the case of POE, LG Chem currently has a plant with an annual capacity of 280,000 tons in Daesan, and when the 100,000-ton expansion is completed, the POE production capacity will be expanded to a total of 380,000 tons. This is expected to reach the second largest in the world in terms of production capacity.

Meanwhile, LG Chem also signed an investment agreement (MOU) with Chungnam Province and Seosan City so that the planned investment can be carried out smoothly.

Through this agreement, LG Chem secured an additional new site with an area of 790,000 m2 (240,000 pyeong) in addition to the existing Daesan Complex site, and decided to actively utilize it for the establishment of a new plant and investment in related eco-friendly materials and processes.

LG Chem said that this investment is expected to create new jobs for about 400 people through direct employment and will actively contribute to revitalizing the local economy.

At the signing ceremony, Chungnam Governor Seung-jo Yang said, “LG Chem will grow larger and further develop here in Chungnam. We will actively carry out more business-friendly policies so that companies and regions can mutually develop together.”

Hak Cheol Shin, Chief Executive Officer of LG Chem, stated that “This investment agreement is a part of the sustainable growth strategy and a signal to announce the full-fledged scale-up of the eco-friendly material business.”

Furthermore, he added, “We will not only strengthen our long-standing partnership with Chungnam Province and Seosan City, but also raise the level of cooperation one step further to grow together toward a sustainable future.”