Mircroplastic found in rain drops, not just under the sea

Scientists have recently found that microplastics were raining down in the uninhabited Pyrenees in the Southern France, which had been derived from the sea, accumulated in clouds and fell down this area.

This is absolutely direct consequence caused by humans as plastics have been overused in our everyday life and overdischarged to the environment. It was found that there had been 365 microplastic beads “poured” down with rain per square meter in the Pyrenees each day. 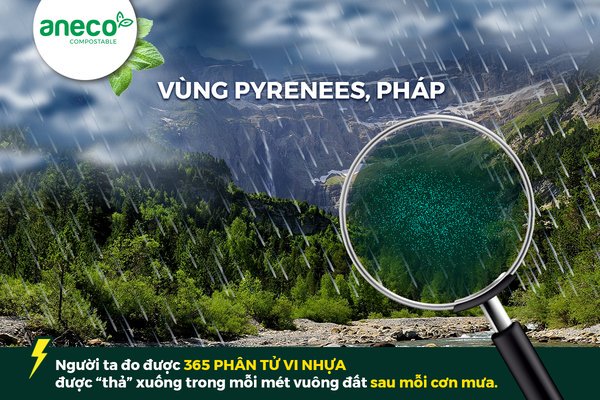 ” It is terrible to think about the amount of microplastics raining down and remaining permanently in the Pyrenees. Microplastics should be considered as a new form of air pollution,” warned by Deonie Allen, a researcher of EcoLab, University of Agriculture and Life Technology in Toulouse, France. Technically, the reason that such microplastics were said to be naturally circulated by water in the atmosphere, evaporated from the ocean, transformed into clouds, and finally rained down to the Pyrenees, is because within the radius of 100km, scientists did not found any remarkable sources of plastic waste which could lead to the mountain of 3 thousand meters altitude.

Previously, only two studies were conducted on microplastics suspended in the air, and they were both conducted in large cities, and the results were quite similar as the amount of waste discharged here were totally different from the findings of microplastics in a French remote mountainous area. Now, it can be concluded that microplastics are everywhere: “If you go down the street with a UV light, set its wavelength at 400 nanometers, and you will be able to see all of the microplastics and dust existing in the air while flashing the light. There could be even more if you were inside. It sounds quite scary.”

Allen and her colleagues had collected samples of microplastics for five months in a meteorological station at 1,400 meters above sea level, utilizing a storage system which kept microplastics floating in the air and resembled a hopper. After that, they counted and classified microplastics with the size of less than 300 microns (0.3 mm). According to the scientists, more than half of them were smaller than 25 microns, which was half the diameter of a strand of human hair. 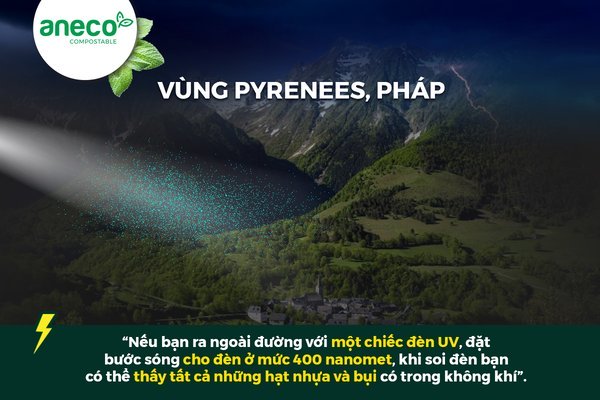 Subsequently, the researchers started studying the wind directions to find the origin of the microplastics in the Pyrenees. Within the radius of 100km, there were only a number of small scale farming households, without large industrial areas.

Throughout the last several years, scientists have warned that humans are creating a full plastic planet. 420 million tons of plastic waste were discharged in 2015. This figure in 1950 was only 2 million tons. A study conducted in 2017 unveiled that, during that period of 65 years, 6 billion tons of plastic waste was sent back to the environment, floated under the sea or collected at large landfills. Starting with the production of plastic bottles, plastic bags or packaging, and plastic created by humans gradually decomposes to form tiny plastic beads of micrometer or nanometer size. A study findings estimated that approximately 15 to 51 trillion microplastic particles are available at ocean surface.

The reconsumption of microplastic that were discharged to the environment into human body through food, water and air has been proven, but the consequences for our health have not been carefully studied. Microplastics that are smaller than 25 microns can enter our body through respiration, while those of less than 5 microns size can remain in humans’ lung tissue. Certainly,terrible consequences were caused to the health, however, its extent was not specifically researched.

In the meantime, burning fossil fuels, such as coal, also formed toxic gases which cause asthma, affect children’s memory and IQ. Mostly air pollution standards were applied and varied by countries to reduce the amount of less than 10 microns and 2.5 microns fine dust in the air. Such standard was known as PM10 and PM2.5. 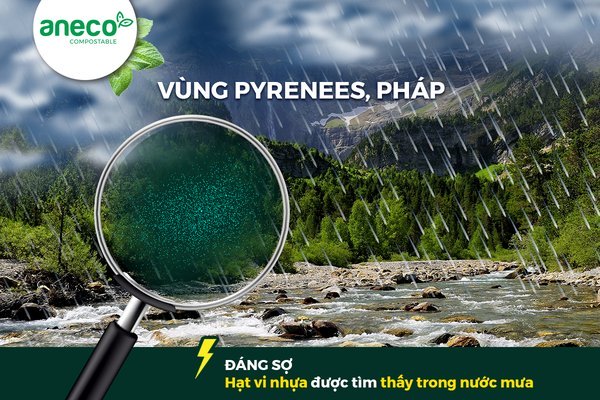 ” It shouldn’t be surprised to know that microplastics exists everywhere,” unveiled by Mr. Roman Lehner from University of Friborg, Switzerland. Nanoplastics did exactly the same. Unfortunately, it cannot be successfully identified by the current technology. These nanoplastic particles were characterized by different physicochemical properties in comparison with microplastics, which was bigger in size. One of them was the small size. Thanks to such property, they were more likely to be involved in chemical reactions than microplastic particles. Therefore, a higher risk to human body may be found.